Bin Sachivalay Examination cancel The big reveal about malpractice, will the government cancel the exam now? 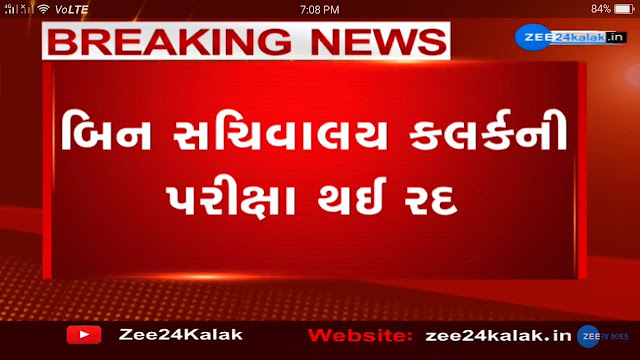 The unschoolers taken in the state are coming up against the shocking revelations after taking the clerk’s test. Students are accusing the paper of the non-secretarial clerk examination taken on November 17 last leaked. In the FSL investigation, this paper has been leaked.
FSL investigation revealed paper leakage
The paper leaked on the basis of a mobile message
The paper leaked before the due date of examination
Non-secretarial examination papers have been leaked on the basis of mobile message. The paper leaked before the due date of examination
Now it is facing that there is malpractice in this exam. Whatever exams are being taken by secondary service selection and there are misconduct. Now, with the impression of the state government, one can now decide not to take the next exams through secondary service selection
Pradeep Singh’s statement in the SIT investigation on non-secretarial examination
Home Minister Pradeep Singh Jadeja said the SIT team would complete the investigation within its time limit. The facts that will come up in the SIT investigation will be presented to the government. The state government will take a decision based on those facts.
Importantly, the paper alleged that the paper was circulating on social media for 11-6 minutes on November 17. Students have claimed that the paper went viral on social media before Clark’s exam was due to take place at 12am. As a result, the fate of millions of students is being questioned. Some students have also claimed that at some places seals were broken papers but an attempt was made to suppress the entire incident.
It may be mentioned that the LRD paper was leaked earlier which led to the re-examination. At that time the paper of the non-secretarial clerk retaken has also been leaked.
Then there are some questions or will the government cancel the exam now? What action will be taken against the paper leaker? Was the student’s evidence accurate? When will a paper blower strike?
Want to read in Gujarati: Click here