Change Your Name And Surname In the certificate : Important News Report Education board 2020
Now You Can Change Your Name And Surname In Document :The General Meeting of the Board of Education was held on Tuesday at Gandhinagar Board Office. The proposals adopted in the Executive were discussed in the General Meeting. Some of which were accepted by the Board. The most important proposal was to accept the name-surname correction in the certificate. 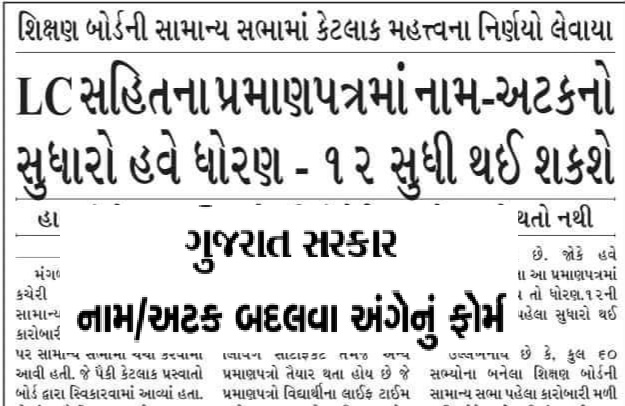 So far, the name and address of the certificate, including the LC, had been forgotten, it could have been upgraded before the standard 10th board exam.
Now the proposal has been accepted by the Board that the amendment can be done till standard 12 examination. Following the standard 10 board examination, the student’s school leaving certificate and other certificates are prepared which certificates become certificates for the student’s life time. The certificates that remain valid in any operation. That is, if you want to draw any documents from the selection card, you have to write the name and surname according to the LC. However, if there is any mistake in this certificate after standard 10 then the standard 12 board examination may be improved before.
It is worth mentioning that a total of 60 members of the board of education were found to be executive before the general meeting. However the proposals were presented by the members in the executive. The promissory notes were taken in the executive order. Those proposals were discussed at the General Meeting held on Tuesday.
Change Your Name And Surname In the certificate Form : Download