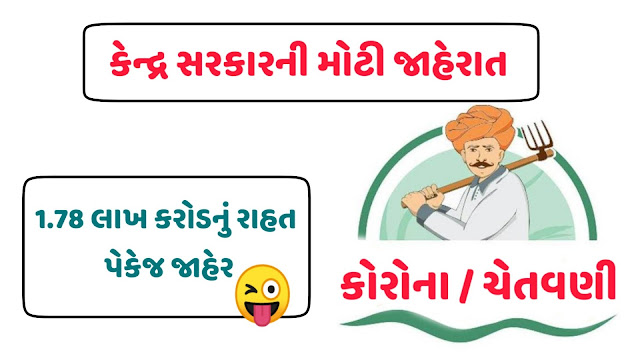 ●The central government has announced a package of 1.70 lakh crore in the Corona crisis. It is important that this package is announced for the relief of the poor affected by the lockdown. In addition, the central government has announced 50 lakh insurance for 20 lakh health workers present on duty in the corona crisis. There have also been important advertisements for farmers and EPF holders.
●It directed the state government to use the District Mineral Fund for medical screening, testing and corona awareness.
●For construction workers, their welfare fund has 31 thousand crore and 3.5 crore labor. The central government asked the state government to help in any difficult situation.
●The state government will benefit from this amount when the Corona lockdown is in a state.
●Big announcement about EPF
●Talking about the EPF, the government had announced that the government would provide employee and company share for the next three months. Which means that the government will provide 12-12% of PF money from both sides for the next three months. This relief will be applicable to people with up to 100 employees with 90% employees having less than 15000 salaries. The announcement will benefit 80 lakh employees and benefit 4 lakh companies.
●In addition, changes to PF Scheme Regulation will facilitate non-refundable advance up to 75% deposit or three months salary.
●Advertising on the celebrated plan
●Under the celebrated scheme, 8 million BPL families have been announced to provide free gas cylinders for three months.
●Important announcement for women
● In the accounts of 20 crore women, housing will be deposited at Rs 500 per month for three months.
●Relief for the elderly and the disabled too
●1000 rupees will be provided for the elderly, widows and the disabled. This will be for the next three months. Which will be deposited in two installments. Direct benefit transfer will be made for the people in this category. About 300 million people will benefit from this initiative.
●Increased labor wages
Sitharaman said the wages of laborers under MGNREGA have been increased. The wages were previously Rs 182 which is now Rs 202. 5 crore families are expected to benefit.
●An even bigger ad for 8 crore farmers
●An announcement was also made for farmers under the Prime Minister’s Kisan Samman Nidhi scheme. It has been decided to deposit Rs 2000 in installments in their account in April. This advertisement will benefit 8 crore farmers. Money will be transferred directly to the farmers account through Jan-Dhan account.
●50 lakhs insurance to 20 lakh employees
Finance Minister Sitharaman thanked health workers working in the Corona crisis. He has announced medical insurance worth Rs. 50 lakhs. They include Asha workers, paramedical staff, technical staff, doctors. It will benefit about two million employees.
Cheap cereal ads too
● In addition, the Prime Minister’s Poor Welfare Food Scheme will provide food to 80 million poor people. There will be no poor appetite so each person will be given 5 kg of wheat or rice for the next three months. Apart from that, they will also get the same amount of five kilos previously received. 1 kg of pulses of choice will be provided per family for the next three months.
●Key points of the finance ministry press conference
●Nirmala Sitharaman announces a package of Rs.1.7 lakh crore
●36 hours later the finance minister announced the package again
Compliance relief first
● Then the poor are the poor people who need it
Talked about how the poor get a night out
Introduced the Poor Welfare Package
◆Important Link
Gujarati Full Info
●Amari Aa Website Ma Modi Yojana 2020PM Modi Yojana 2020, Modi Sarkar Yojana, Sukanya Yojana, PM Modi New Scheme 202, Modi Yojana For Students, Modi Yojana For Girls, Narendra Modi Yojana, Pradhan Mantri Awas Yojana, Pension Yojana, Awas Yojana, Bank Scheme, Government Scheme,Jaherat Karavama Aavshe