Ban on all gatherings, including religious and political, no more than 50 people can attend wedding from April 14 The Gujarat High Court today slammed the state government for taking serious note of reports that Gujarat’s health machinery had failed to handle the condition of Kovid-19. Following which, the successful Chief Minister Rupani has announced some decisions. 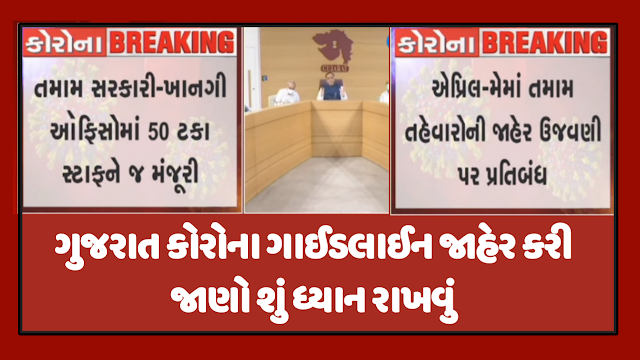 Chief Minister Rupani said all festivals till April-May are banned. Political, social, birthdays etc. as well as public celebrations will not be allowed. From April 14, only 50 people will be able to attend the wedding. Only 50 per cent people have been notified to work in government, semi-government and private offices.

It is my request that doctors do not prescribe unnecessary remedivir injections. Arranged to get 60 thousand RTPCR tests and reports in 24 hours. Orders regarding decisions announced by the government

VS and LG should raise 750 beds in the hospital 15 thousand beds have been raised in the last 15 days. There are 11 thousand beds in Ahmedabad. VS and LG should set up 750 beds in the hospital. The number of beds will be increased by acquiring new hospitals. About 100 domes have been erected. 30000 tests are done daily. Thousands of people are doing the test. There are 150 Dhanvantari chariots in Ahmedabad. 104 and raised in the number of Sanjeev’s chariot. There are about 1500 Sanjeev’s chariots in Ahmedabad.

For the first time, more than 6,000 new cases are breaking new records every day in Gujarat. For the first time in the state, the number of corona cases has crossed 6,000 and new cases have been registered all the time. In the last 24 hours 6021 new cases have been reported and 2854 patients have had coronary heart disease. In the state, 20 patients were found in Ahmedabad city, 18 in Surat city, 7 in Vadodara city, 4 in Rajkot city, 2 in Rajkot district, 1-1 in Bharuch, Botad, Sabarkantha and Surat districts.