At present all the schools in the state have been closed for 14 days due to corona and the examinations have been postponed. Due to which the new session also starts late. Following this, the Gujarat State School Administrator Mahamandal has decided to pass the examination without any examination and the new academic session will be started from June or July instead of April. 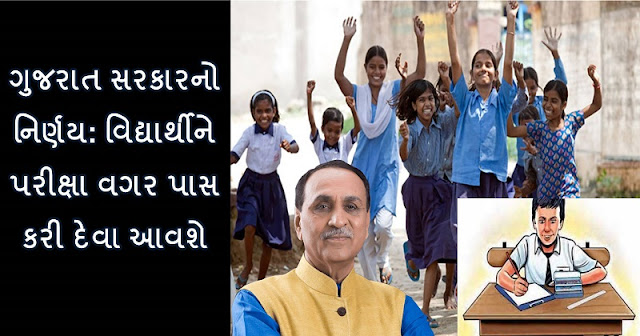 The UP government has made a big decision for the students due to the corona virus. Every student up to grade 8 will be passed without examination and will be sent to the next standard. The circular has been issued by UP Chief Secretary Renuka Kumar.
The Uttar Pradesh government on Tuesday canceled all the state exams. It has been decided to close the educational institution April 2. It was decided at a meeting of the Board of Directors of the school held today that, in view of the corona virus and the upcoming potential impact, if required, gave mass promotion to the students of Std. Presenting to the government that it should be sent to the class.
It was decided in this meeting that the COVID-19, given the corona virus and the upcoming potential impact, gave mass promotion to the students of Std.1 to 9 on the basis of the semiannual and unit exams taken in the schools of the state, if passed without annual examination. It was introduced to the government to be sent to the class.
News Read In Gujarati
According to the information available, the new academic session will be held on April 20 due to uncertainty as to whether the schools will be conducting examinations and how late to conduct the situation after the opening from March 30 and the results are urgent and re-examination of students who failed in Std. 5 and 8. Instead of having a summer vacation that means starting in June or the first week of July as before. To networking.
Join Whatsapp Click Here
Join Telegram Click Here