What will be closed according to the new order- Every domestic and international flight except medical service
-Metro service, school, college
– Hotel, Restaurant, Cinema Hall, Shopping Mall, Gym, Swimming Pool, Auditorium
– All kinds of social and religious programs
-Religious places will be closed.
– The ban on going out from 7 pm to 7 am is still in force.
The following activities may be started with some relaxation
-Passenger vehicle and bus service can be started with the consent between the states
– Now the state government can decide which area is in the red, orange and green zones.
-Only required service will be allowed to continue in the containment zone.
Earlier on Sunday, six hours before the end of the third phase of the lockdown, the National Disaster Management Authority (NDMA) had written a letter to the Center and the state government asking them to extend the lockdown by 14 days. At 9 pm tonight, Cabinet Secretary Rajiv Gaba will hold a video conferencing with the Chief Secretaries of State. Tamil Nadu, Maharashtra, Punjab and Mizoram have already announced an extension of lockdown till May 31.
Following the outbreak of Corona virus in the country, the central government has issued a lockdown 4.0 case. It has been announced that Lockdown 4.0 will be implemented across the country till May 31. The Central Government has issued a general guideline with this. However, it also said that the state governments can decide the zones on their own and give concessions. A high level meeting of the Gujarat government is currently underway on this issue. It remains to be seen what the state government will announce in its guidelines on Lockdown 4. 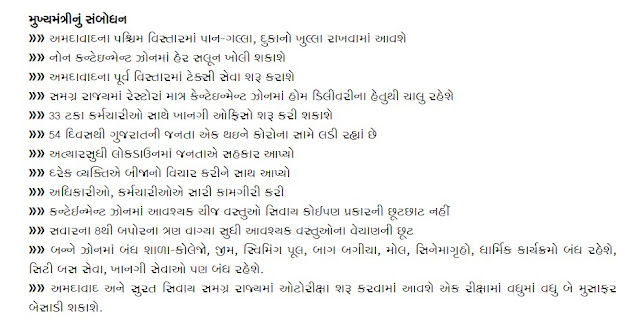