In lockdown, the Gujarat government has taken a major decision: From Monday, Rs. 1000 will deposit directly 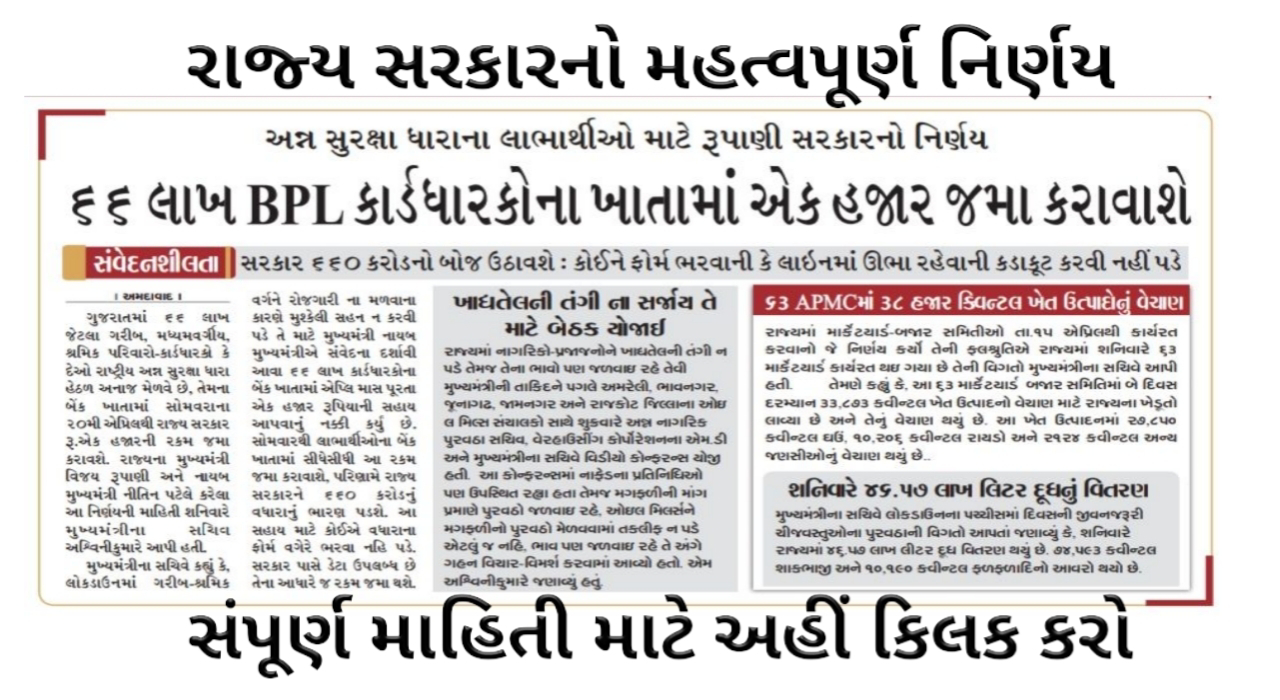 The corona crisis has increased in Gujarat. An important announcement was made by CMO Secretary Ashwini Kumar when there were 1272 Corona cases registered and 48 deaths in a single month. It has announced direct Rs.1000 deposit in the account of 66 lakh people. Along with this, some other important announcements were made.

CMO Secretary Ashwini Kumar today announced the importance from the state government. There is a lockdown until May 3 when there is a corona crisis across the country. In this, the state government in Gujarat has taken an important decision in which a big announcement has been made for 66 lakh card holders. Those who come under the National Security Food Act will get this benefit.

With this help, the government imposed an additional burden of Rs 660 crore

CMO Secretary Ashwini Kumar today announced the importance of the government at a press conference. He said that Rs. 1000 assistance is announced to 66 lakh cardholders. Which will be deposited directly into the beneficiary’s account and no form will have to be filled for this. He said that this assistance would increase the additional burden of Rs 660 crore on the government.

No form will be required to be filled
Ashwini Kumar said that the assistance would be provided immediately and deposit would be started on Monday in the beneficiary’s account. There is no need to fill out any form to get this amount.

Amid growing corona-positive cases in the state, the Romanian government announced the importance of the poor. CMO secretary Ashwini Kumar said at a press conference that it has been decided that Rs.

IMPORTANT LINK:
READ VTV GUJARATI NEWS REPORT
More Information Video click here
Importantly, direct one thousand rupees will be deposited in the accounts of 66 lakh working and poor families. No beneficiary will have to apply for this, Ashwini Kumar said. Apart from that, he said, so far 60 lakh beneficiaries of the state who are not included in the NFSA have so far distributed free ration to up to 45 lakh families.