Classical Singer Dr. Jayanti Ravi Cleaning, Toilet, Champion of Education Improvement, More Active in the Field than in the Office 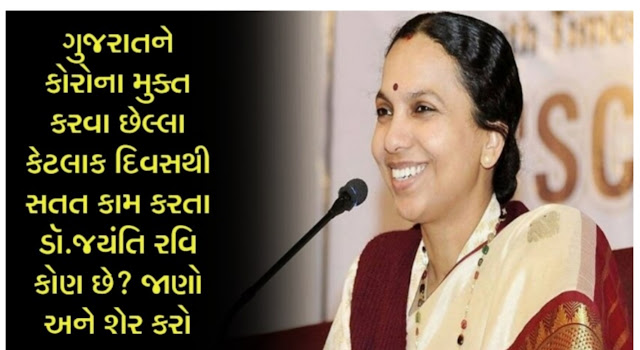 He acted as a collector of Godhra during the 2002 Godhra rally in Gujarat.
AS1991 batch IAS officer Jayanti Ravi holds a MA in Nuclear Physics.
He also comes to the office with a bicycle and starts praying with the staff
If you go to the hospital and take the baby in the crib, dig yourself a pit for the toilet
Ahmedabad: At present 58 corona patients have been registered in the state and five of them have died. Ailing Principal Secretary and Classical Singer Dr, who has the biggest responsibility of taking care of the health of the people of Gujarat, in the midst of Corona, six and a half crore people. Jayanti Ravin has started recognizing the whole of Gujarat in the last week. Whenever there is a corona in the world, the daily health of the Gujarati people is providing accurate information in the market of daily updates and rumors. Not only that, they are constantly monitoring coronary patients and other important things like their travel history, sample testing and home quarantine. In those days, twice a day, he is giving a health bulletin to corona patients in Gujarat.
Ph.D in e-Governance and champion of cleaning, toilet, education development and improvement
Dr. Jayanti Raviam is a non-Gujarati speaking but clearly speaking about Jayanti Ravi, he is a 1991 batch IAS officer and holds a master’s degree in nuclear physics and a Ph.D in e-governance. Ravi, who lives in the utmost simplicity, is also strict about the work. He has been serving in various departments as a high official in Gujarat, especially his work in education, rural development and health has been appreciated. At the time of the Swachh Bharat Abhiyan launched by PMModi, he was the Commissioner of Rural Development in Gujarat and due to his work in cleaning and toilet operations in the state, the Central Government gave him the title of ‘CHAMPION’.
Not an officer in the field but ‘Common Woman’
Talking about Dr. Jayanti Ravi’s method of working, he is less in the office but more in the field during his working hours. They become ‘Common Woman’ with people not an officer in the field. He was the collector of Godhra at the 2002 Godhra rally in Gujarat, at which time he handled the situation with his anger. Dr. Jayanti Ravi also made many decisions for the students of Gujarat in the field of education.
Healthy Life Style by Yoga and Cycling
Dr. Jayanti Ravi is always found in plain saree. As well as going to the office on a bicycle rather than a government car, he is equally aware of his health with the people of Gujarat, taking time out of busy schedules for yoga, cycling and his hobbies. He also prays with his staff and concerns his family. Jayanti Ravi’s mission of such a social service can be said that
Read In Gujarati Click here
A passion for human development and service to humanity ‘.