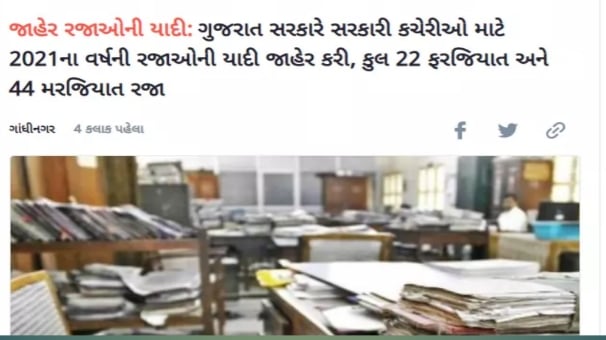 Due to Gandhi Jayanti, Bhaibeej and Christmas holidays on Saturday, it was included in the main 22 holidays.
Mahavir Janmajayanti, Independence Day, Raksha Bandhan and Sardar Vallabhbhai Patel Janmajayanti holiday on Sunday

44 Announced leave of absence
The Gujarat government has also announced 44 compulsory holidays, eight of which are on Sundays, so it has not been declared as a compulsory holiday. Government employees will be able to enjoy a maximum of two compulsory holidays on festive occasions without any religious restriction of their choice, for which the employee has to make a written application in advance, which will be approved by the appropriate authority seeing the importance of government work.
16 holidays declared in banks
In the year 2021, a total of 16 holidays have been declared in the banks, out of which 5 holidays are on Sundays and are not included in the public holidays.
2021 public holidays for Gujarat government offices
HOLIDAY LIST 2021 : CLICK HERE
Note: – (2) If any of the above mentioned Muslim holidays do not come on the announced day, it is a festival and the day on which it is actually celebrated can be given to the Muslim employees of the government as a voluntary holiday. 8 Part-2 Public Holidays for Banks, 2061 No .: Gus / 2/2010 / Jasar / 102050/500 / Gh: Declaration No. 8-1-3 of the Ministry of Home Affairs of the Government of India dated May 8, 19 – Reading with JUDL-2 The Government of Gujarat, in consultation with the Reserve Bank of India, Ahmedabad declares the following days as a public holiday for banks during the year 2021, following the disclosure of Section 4 of the Amendment Act, 181 (24th of 191).