Maruti Suzuki recalls WagonR and Baleno due to fuel pump defect, will be replaced for free without charge 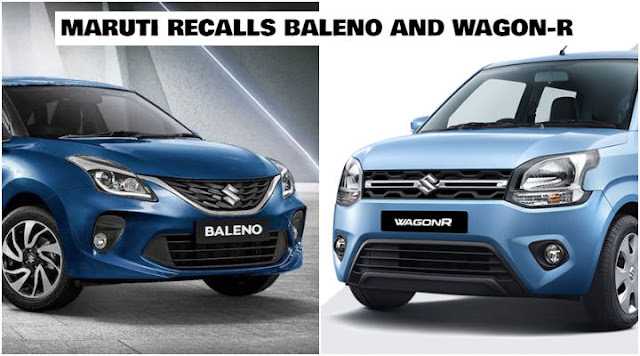 Maruti Suzuki recalls WagonR and Baleno due to fuel pump defect, will be replaced for free without charge

Maruti Suzuki on Wednesday announced a recall for over 1.34 lakh units of WagonR and Baleno manufactured between January 8 and November 4 of 2019. This is one of the biggest recalls from the company in recent times and is to investigate a possible fault in the fuel pump of the vehicles.
Maruti said it is voluntarily recalling WagonR 1.0-litre and petrol model of Baleno manufactured between the dates previously mentioned and will check a possible issue with the fuel pump. If found faulty, the part will be replaced free of cost.

Owners of these vehicles will be contacted by authorised dealers of Maruti over the course of coming times.

Owners can also themselves check if their vehicles need to be brought in for the check by visiting Maruti website – for WagonR, and Nexa website for Baleno. Here, the chasis number of the said vehicle – should begin with MA3 or MBH, followed by a 14-digit alpha-numeric digits – will have to be entered. The chasis number is embossed on the vehicle ID plate and can also be found in the vehicle invoice/registration documents.

Read This Article In Gujarati
Previously, Maruti had recalled 63,492 units of Ciaz, Ertiga and XL6 petrol smart hybrids to check a possible fault in the for a possible issue with the Motor Generator Unit (MGU) of these vehicles. The December of 2019 recall were undertaken globally because of the potential safety defect.

Recalls are considered proactive measures from auto manufacturers to check and fix potential vehicles which have already been sold and are out on roads. Globally, several major automotive companies have issued recall orders in recent months to check possible faults of varying nature and with different impact potentials. These recalls almost always involve the faulty part(s) being replaced or repaired with no cost to the owner.
Maruti Suzuki India Limited today proactively announced to voluntarily undertake a recall for WagonR (1 Litre) manufactured between November 15th 2018 and October 15th 2019 and Baleno (Petrol) manufactured between January 8th 2019 and November 4th 2019. The recall will cover 134,885 vehicles of both Baleno and WagonR models.

India’s biggest carmaker by market share said it will inspect 56,663 units of WagonR and 78,222 units of Baleno for a possible issue with the fuel pump. Faulty part will be replaced, free of cost.

Owners of the suspected vehicles under this recall campaign will be contacted by authorized dealers in due course of time, the company said.

Customers of suspected vehicles can also visit the ‘Imp Customer Info’ section on the Maruti Suzuki’s website (www.marutisuzuki.com) for WagonR and www.nexaexperience.com for Baleno and fill in their vehicles chassis number (MA3 or MBH, followed by 14-digit alpha-numeric number) to check if their vehicle needs any attention and follow the instructions, Maruti said. The chassis number is embossed on the vehicle ID plate and is also mentioned in the vehicle invoice / registration documents.
Toyota Kirloskar Motor (TKM) today said it is recalling around 6,500 units of its premium hatchback Glanza in order to replace faulty fuel pumps.

TKM Glanza is a rebadged version of Maruti Suzuki’s Baleno. In March 2018, Toyota and Suzuki had concluded a basic agreement for supplying hybrid and other vehicles to each other in the Indian market.

Last year, Maruti had said it will inspect 63,493 vehicles of petrol SHVS of Ciaz, Ertiga and XL6 for a possible issue with the Motor Generator Unit (MGU).

“In the interest of its customers, Maruti Suzuki has decided to proactively recall the vehicles for inspection and those found OK will be released immediately. Vehicles requiring replacement of faulty part will be retained for part replacement free of cost. Keeping in view customer convenience, Maruti Suzuki dealers may make alternate mobility arrangements in such cases, if required,” the carmaker said last year.