After the all-party meeting on the Koro issue, Prime Minister Narendra Modi has said something important about the vaccine. PM Modi said that there is no need to wait long for the vaccine. The vaccine is expected to be available in the next few weeks. We have a good system for vaccination.
PM Modi’s statement on vaccine price issue 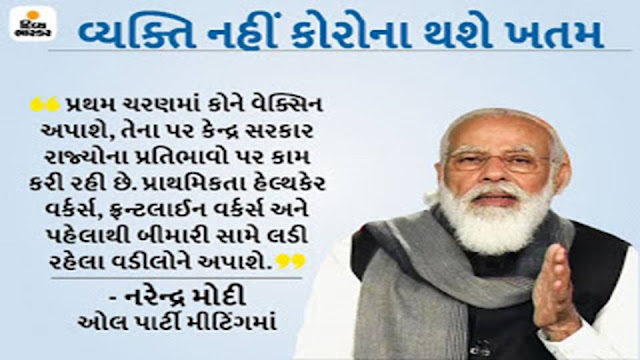 The government today held an all-party meeting on Korona. The meeting was chaired byPrime Minister Narendra Modi via video conference. He said there was no need to wait for the corona vaccine, the vaccine would be ready in a few weeks. This is Modi’s first and most important meeting after discussions with vaccine companies. That said, the corona vaccine will be ready in a few weeks, the first vaccine will be given to the sick, the elderly and health workers.

The Prime Minister has been very active about the vaccine for a week now. On November 28, he visited the Serum Institute in Pune, Zydus Biotech Park in Ahmedabad and Bharat Biotech Face in Hyderabad to review the preparations. Geneva Biopharma, Biological E and Dr. by video-conference on 30 November. Discussed with Reddy’s team. The PM advised him to make extra effort to explain to the general public in simple words about the effects of vaccines.

PM Modi said that corona mortality rate in India is much lower than other countries. India made a long journey from February to December with the Corona. Corona vaccine will be given to the elderly first. A special task force has been formed for the corona vaccine.

The National Expert Group will make all decisions according to national and local needsAn all-party meeting was held under the chairmanship of Prime Minister Narendra Modi to discuss the situation in the country. An all-party meeting was held today on the issue of discussion on Corona. The meeting is discussing Corona’s transition status. The corona vaccine issue is also being discussed at the meeting.

The question of the cost of the vaccine is also natural. The Center is in talks with the states in this regard. The decision will be taken by giving top priority to public health. India today is one of the countries where testing is increasing day by day. India is one of the countries where recovery rate is high and mortality rate is declining. The manner in which we fought the Corona shows the will of every countryman. India has fought the battle better than the developed countries.

Avoid rumors
We are not only concerned about the citizens of our country, but also working to help other countries. India has embarked on a long journey amidst the atmosphere of confidence and hope in December, starting with the anticipatory atmosphere of February-March. Now that the vaccine is ready, the same public participation is needed. Suggestions from all your experienced colleagues will also play a role in this from time to time. When such a big vaccination campaign is going on, many rumors are spread in the society. This is against the public interest and the national interest. It is the responsibility of all parties to awaken the citizens of the country and protect them from rumors.

1.39 lakh people die due to epidemic in the country