Skip to content
The Union cabinet on Monday sent out a message that the country should be ready for sacrifices in its fight against the covid-19 pandemic by suspending the Member of Parliament Local Area Development (MPLAD) fund for two years and effecting a 30% pay cut for all members of Parliament (MPs), including the prime minister and central ministers. 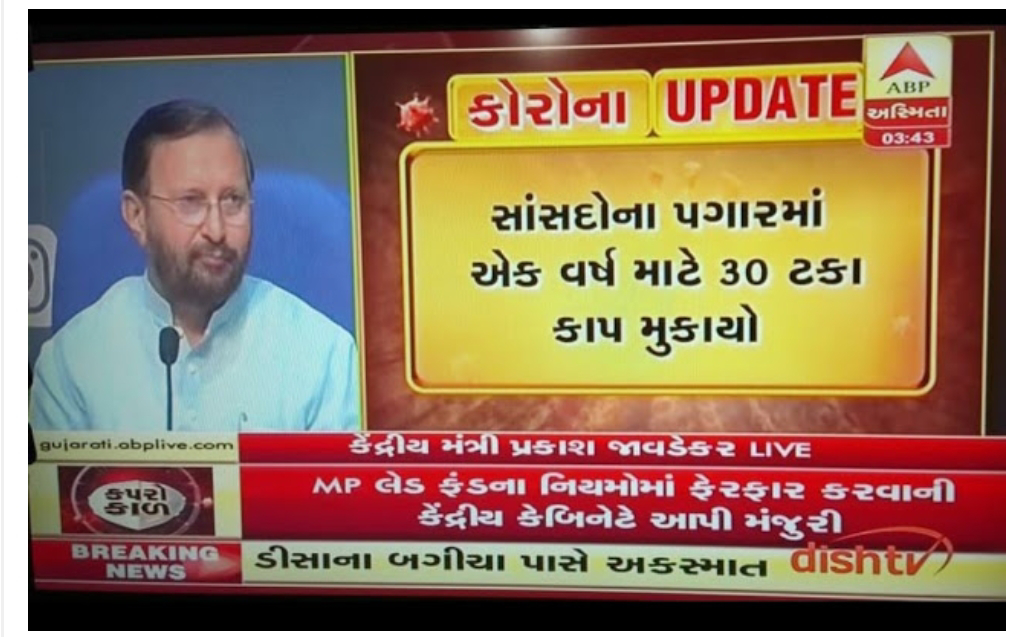 The President, vice-president, and the governors have also voluntarily decided to forgo 30% of their salary for a year, Union minister for information and broadcasting Prakash Javadekar said at a press conference after the cabinet meeting. The cabinet’s decision comes in the wake of central government employees having already contributed a day’s income to augment the resources for the fight against the virus that has infected more than 4,000 people in India and killed more than 100. MPs get a monthly salary of ₹1,00,000, according to data collated by PRS Legislative Research. They are also entitled to a constituency allowance of ₹70,000 per month and office allowance of ₹60,000 per month.
The bigger message of sacrifice, which Javadekar termed as a “right signal” and gesture of accountability, comes as the government is readying to announce a second round of financial stimulus to deal with the covid-19 pandemic, with the virus infecting more than 4,000 people and killing more than 100 in the country.
The Union finance ministry had in late March announced a ₹1.7 trillion economic relief package to deal with the coronavirus outbreak and its cascading impact on everyone.
The non-operation of the MPLAD fund for two years will allow the government to channelize the earmarked corpus of ₹7,900 crore to the consolidated fund of India, Javadekar said. “As a part of the government’s continued efforts to contain the spread of covid-19, the Union cabinet chaired by the Prime Minister Narendra Modi has decided not to operate Members of Parliament Local Area Development Scheme (MPLADS) for two years, 2020-21 and 2021-22. These funds will be used to strengthen the government’s efforts in managing the challenges and adverse impact of covid-19 in the country,” the cabinet said separately.
The move, however, invited a political backlash with some opposition party leaders criticizing the decision to suspend the MPLAD fund as short-sightedness.
The Congress led the charge. Party spokesperson Randeep Singh Surjewala said his party supports the salary cut of MPs but contended that the suspension of the MPLAD fund will adversely impact grass-root level work. “Dear PM…please note that MPLAD is meant to execute development work in the constituency. Suspending it is a huge disservice to the constituents and will undermine the role and functions of MP,” Surjewala tweeted.
Veteran CPM leader and party general secretary Sitaram Yechury also reacted sharply to the suspension of the MPLAD scheme, which entitles a parliamentarian to spend ₹5 crore a year on his or her constituency. There is enough evidence that covid-19 is best fought at the state and local level, he said.
“By suspending MPLADs, government is taking away expenditure which would have attended to unique requirements of an area. This centralization goes against federalism, development, will weaken our fight. This government has continuously wasted public money on statues, extravagant personal publicity campaigns and events,” Yechury said in tweet posts.
Full Information In Gujarati
The cabinet meeting also discussed with the farmers. Prime Minister Narendra Modi said that the government will provide every help to the farmers. He said that a strategy must be devised for the time after the lockdown is over. He ordered the ministers to make a list of the 10 decisions that would be urgently needed after the lockdown.
MPLADs fund
Each MP is entitled to Rs 5 crore per annum under the MPLADS fund in a year, which he or she can use for the development of their constituency.
There are 543 MPs in Lok Sabha and 245 in Rajya Sabha. Put together, the MPLADS fund for the two suspended years will amount to around Rs 7,900 crore, which is being donated to the government’s Consolidated Fund.
Calling it a “historic” decision, Javadekar said the council of ministers were of the view that they should set an example. “MPs said that charity begins from home and as peoples’ representatives, they should take the lead,” he said at the briefing.
To implement the decision, an ordinance was required. “It’s a law under which we get our salaries. Because the Parliament is not in session, we decided to bring in an ordinance so that the decision can be implemented immediately. We will amend the law once the Parliament commences,” Javadekar added.
Central government employees have also given a day’s salary to the PM CARES fund that was set up by Modi on 28 March to invite donations from citizens as the country tackles the growing number of coronavirus cases. In the time since the nationwide lockdown was implemented to contain the spread of the virus, India’s number of cases jumped by more than 3,000. There are currently over 3,600 active cases and more than 100 deaths