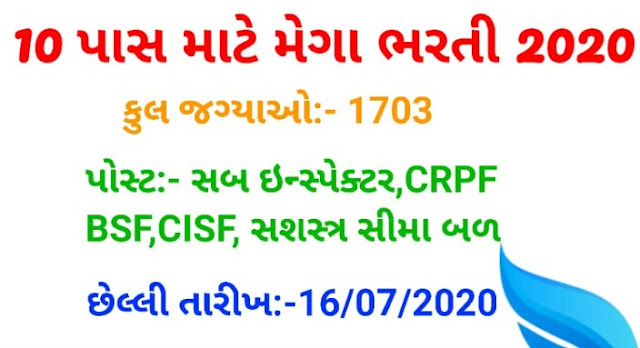 The Staff Selection Commission is an attached office of the Department of Personnel and Training and comprises of Chairman, two Members and a Secretary-cum-Controller of Examinations who are appointed on such terms and conditions as could also be prescribed by the Central Government from time to time. The Commission is provided such supporting staff as needed by the Central Government.
Sub-Inspector in Delhi Police and Central Armed Police Forces::
Pay Scale(Salary)
SI (GD)/SI (Executive)
: Rs. 35,100/–Rs.1,12,400/- Per Month
Rs.29,200/–Rs.92,300/- Per Month
ASI (Executive):
: Delhi Police & Central Armed Police Forces
SI & ASI Posting Under
: Central Police Organization, SSC
Department Name
Educational Qualification
SI (Delhi Police)
SSC Recruitment 2020 –1703 Posts | Apply Online
– Candidates having Graduation Degree in any stream from any recognized university along with having Vehicle Driving License for LMV will be eligible for this post.
For Rest All Posts
Please read Official Notification for Educational Qualification details.
SSC Recruitment 2020 –1703 Posts | Apply Online
born not before 02-01-1996 and not later than 01-01-2001).
Age limit of the candidates should be from 20 to 25 years as on 01-01-2021 i.e. Candidates
important Link
Application Fee:
Candidates can make the payment through Internet Banking, Credit Card, Debit Card or SBI Challan.
Candidates will be selected based on an interview.
Interested Candidates may Apply Online Through official Website.