Skip to content
Some people lost their jobs due to corona and lockdown in the last Vikram Samvat year, but this Vikram Samvat 2078 will prove to be a new hope for employment for the youth. The Gujarat government is going to recruit 35 thousand to 37 thousand vacancies this year 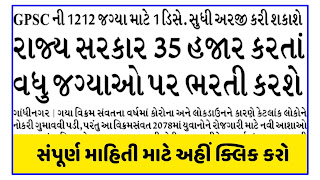 The Gujarat Public Service Commission (GPSC) alone is currently recruiting more than 160 people for the 2,200 approved posts. Of these, the application date for more than 1,200 recently announced recruitments has been extended to December 1. In addition, the recruitment process for the more than 900 previously announced vacancies will also begin soon. Not only that, the government may also approve new posts this year.
According to GPSC Chairman Dinesh Dasa, students graduating from any of the disciplines can apply for RFO, DYSO, GMDC Administrative Officer, Office Assistant and other such posts issued by the Commission 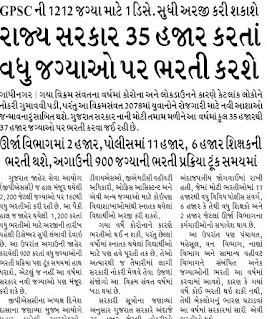 Recruitments could not take place because of Corona last year, but there is now ample opportunity even for students who have graduated in recent years. In this record-breaking year, bright circumstances have arisen for them to get ready for government jobs.
According to government sources, the Gujarat government had kept about 35,000 jobs in the budgetary provision, including large recruits of more than 11,000 different police cadres, 6,000 or more teachers and 2,000 employees of the energy department.
IMPORTANT LINK

Read in Gujarati
Apart from this, many posts related to Panchayat, Revenue, Forest Department, Finance Department and General Administration Department will be recruited this year, as no recruitment was done last year, so reducing the backlog burden will be a good recruitment in the government this year