Breaking News: Minister of Education’s announcement: The final year colleges of UG and PG, including standard 10 and 12 schools, will also start from January 11 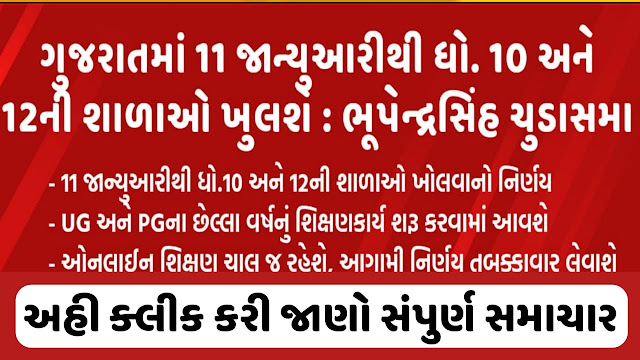 There is currently no idea of mass promotion

The decision to reopen Std 10 and 12 schools from January 11 was taken at a cabinet meeting, Education Minister Bhupendrasinh Chudasama announced today. The state government has started preparations to start schools as per the Corona guidelines of the central government. It has been decided to start January 10 and 12, PG and last year college classes.
All Gujarat boards, government, secondary schools will be started, only Std. 10 and 12 classes will be started, besides final year classes of the college will be started. Education Minister Bhupendrasinh Chudasama said during a press conference that the attendance of students is not mandatory after the commencement of schools and also the consent of parents is not required. He said that at present no decision has been taken to give mass promotion in standard 1 to 8. In addition, the schedule of the examination will be announced later. Exams will be taken from as many courses as will be taught. Online education will continue in schools. In addition, as per the SOP of the Central Government, social distance has to be complied with, schools have to provide thermal gun and soap. Chudasama further said that other standards would also be considered in the near future.
Breaking News: Read In Gujarati
Watch Video : Live
Schools and parents have to take care of these things