Breaking News:  Some important decisions have been taken in the cabinet meeting held at Gandhinagar today. Out of which Rupani government has approved recruitment of 6616 faculty-teacher assistants in the state 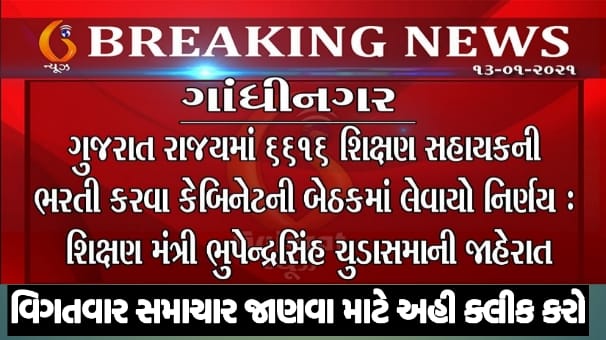 Addressing a press conference, Education Minister Bhupendrasinh Chudasama said that the state government has approved the recruitment of 6616 faculty-teacher assistants in Gujarat. Under this sanction 2307 posts will be filled in the grant aided schools of the state and 3382 teaching assistants will be recruited in the higher secondary schools.
The state will recruit 6616 faculty-teacher assistants
At the same time, Education Minister Bhupendrasinh Chudasama said that 927 professors would be recruited in the state colleges. As per the approval given by the state government, 624 teachers of English subject, 446 teachers of account subject, 334 teachers of sociology, 276 teachers of economics, 254 teachers of Gujarati subject, 1039 teachers of mathematics and science will be recruited in Gujarat.
Appeal to send children to school
At the same time, the state education minister Bhupendrasinh Chudasama had appealed to send the children to school. With this, he said, the dates of the examination will also be announced in the coming period.
official Notification Click Here
NEWS REPORT : CLICK HERE
Std-10 and 12 schools started in the state from January 11
Schools have been closed for the past eight months due to the Corona epidemic. The state government has decided to start standard 10 and 12 schools from January 11.