Skip to content
The state will now be able to have 200 people attending the wedding instead of 100 as per the Centre’s guidelines
Gandhinagar: The entire country and the world, including Gujarat, is currently battling the Koro epidemic. At that time in Gujarat and in the country, unlock is being given by the government gradually. Then Chief Minister Vijay Rupani has taken an important decision regarding wedding ceremonies. In which a big decision has been taken regarding the number of people present at the wedding 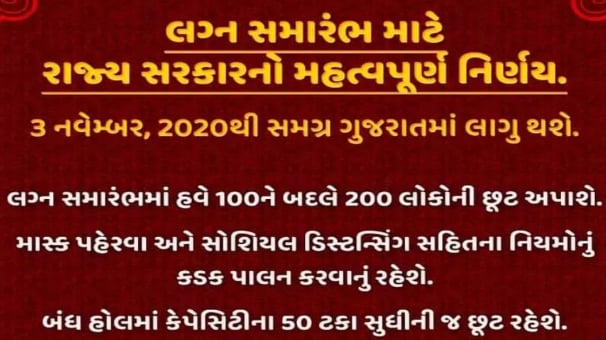 If there are 200 guests, the venue should have a capacity of 400 guest
Now you can get married with the same fanfare as before. More than 200 guests can be invited to the wedding. You can invite as many guests as you want. Simply, you have to find a venue with double the capacity of the guests, as now only guests with 50 per cent capacity of any hall or wedding venue can be invited to the wedding. The social, cultural and political events that were closed due to Corona can also be started in this way. Suppose you are inviting 200 guests to a wedding, the capacity of the venue should be 400 guests.
The wedding season will now begin in the state
Corona’s follow-up lockdown and subsequent unlock process are now likely to give a boost to previously engaged wedding occasions. The Rupani government of the state has doubled the number of people attending the wedding, which was earlier only 100. The government has now allowed 200 people to attend the wedding. However, the concessions will take effect from November 3 tomorrow. In the case of closed halls, the capacity of the hall will be allowed up to 50 per cent for such an occasion.
DIVYA BHASKAR : CLICK HERE
Unlock-4 allowed all kinds of events with a limit of one hundred people
Even before the public curfew was imposed on March 22, state governments across the country banned religious, cultural, academy, sports, entertainment and political planning. It was now allowed to start on September 21st. The open air theater was also allowed to open from the 21st, but these events were allowed with certain conditions, in which no more than 100 people can gather on occasions. Attendees were required to wear masks. There was a need to remedy social distance. In addition, it was mandatory to have thermal screening and hand sanitizer or hand wash in such a place.