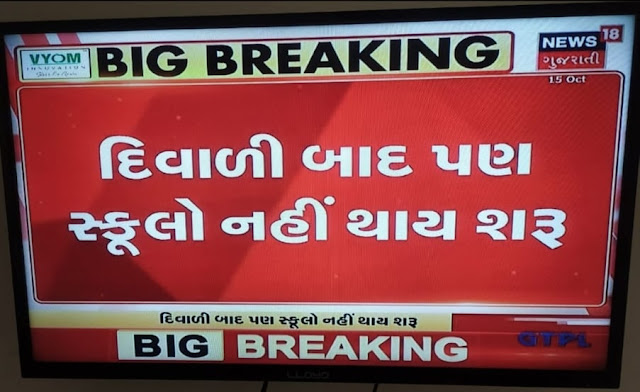 According to experts, the transmission of Kovid 19 is expected to increase in winter. So according to the information from the sources, winter will start now. In the current scenario, when the transition to Corona is largely declining, the government will review the situation after Diwali and only then can it take a definite decision.
Information is also being received that an attempt will be made to know the opinion of parents and administrators in this regard. It is also possible that a vaccine may be available to fight the corona virus by December. Therefore, according to the sources, an atmosphere is being created in Gujarat where schools will open in December.
School closed from March 16, Due to the Corona epidemic in Gujarat, it was decided to close all schools, colleges, educational institutions in Gujarat from March 15 for two weeks from March 16, i.e. till March 29. However the board examinations were kept intact.
News 18 Gujarati News Report on When school reopen in gujarat
The school-vacation was then extended as Corona became uncontrollable. Thus, schools have been closed for about 7 months. Kids are learning the new academic year online.